Margaret Maud Ann Healy was born on this day a number of years ago, the eldest daughter of Thomas P. Healy and Lucy Irene McCarthy.

In April 1997 Margaret succeeded Joseph Quinn as president of the United Irish Societies, becoming the second woman to be so chosen, and led the organization admirably.

Following the conclusion of her presidency, Margaret was appointed the founding chairperson of the Fundraising Committee, also known as the Sponsorship and Marketing Committee. After fifteen years in the position, in May 2014, Margaret advised UIS President Beverly Murphy that she declined to continue in this role. The president duly informed the Elected Executives and Past Presidents of the news at a meeting held on May 6, 2014. 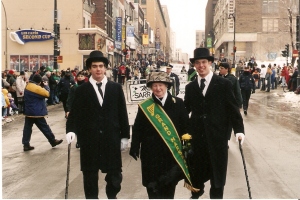 In October 2004, a historic moment in St. Patrick’s Parade history was achieved when the United Irish Societies’ Executive Committee selected Margaret as the Grand Marshal of the 2005 Parade, making history as the first woman to be so honoured, joining her father who was Grand Marshal in 1943.

In September 2009, Margaret was honoured by her community when she was inducted into the Point St. Charles Hall of Recognition, joining a long list of notable people who have been so honoured.

In 2010 the St. Patrick’s Society of Montreal recognized Margaret for her community volunteerism in awarding her the 2010 Community Award at the annual Luncheon at the Bonaventure Hilton Hotel, adding her name to the long list of worthy recipients. Previous recipients include Joe Mell (1994), Audrey McKeown (2000), Mary McDaid (2002), and Marianna O’Gallagher (2008)

Unbeknownst to Margaret, an extensive study of her Irish roots was undertaken at the request of His Excellency Dr. Ray Bassett, Ambassador of Ireland to Canada, to ascertain with certainty her family’s connection to Ireland. Once satisfied the ambassador authorized the creation of a Certificate of Irish Heritage for her, which he personally presented to Margaret at the UIS Awards Banquet & Dinner Dance in March 2012. The Certificate is an official Irish Government initiative to recognize the continuing emotional attachment of the descendants of those who left Ireland’s shores to the land of their ancestors. The Certificate recognizes the enduring emotional ties and sense of identity bestowed by Irish ancestry.

On May 13, 2012 in front of her fellow parishioners, family, and community members at St. Gabriel’s Church, Marguerite Blais, MNA presented Margaret with an award from the National Assembly for her involvement in the Irish community and her positive influence on Montreal life.

On February 28, 2014 Margaret attended the 2014 St. Patrick’s Society Ball as its Guest of Honour, for her years of volunteering and community service.

Margaret and her family have allowed the United Irish Societies to use their garage as headquarters for the organization’s distribution of Christmas Baskets since probably Christmas 1997 when Roberta Wheeler was the committee’s chairperson. The location is ideal as it is central to where the majority of the recipients reside, that being in the Southwest Borough-Verdun-LaSalle area.

Margaret is a true community treasure. There are not many people who can keep up with her pace and with her enthusiasm for accomplishing things. If we could, we would be wise to clone her ten times over.

On this special day, we also wish her a very Happy Birthday!